My first iPhone was an iPhone 4 and I thought I was the coolest kid in town, I spent the majority of my time watching YouTube videos and downloading free games.

Here is a list of ten EPIC iPhone Games that we’re or still are the bomb!

First on the list is a game by Backflip studios,  Ragdoll Blaster.

This physics based game was released to the world in September 2009 and was very successful.

The player would shoot at targets with flying ragdolls, once the targets where hit you would move on to the next level.

The hard part was trying to complete each level in the least amount of tries.

Angry Birds was unleashed in December 2009 and took the world by storm.

The aim of the game was to shoot Birds at the evil pigs who stole one of your eggs.

Angry birds is easily one of the most popular mobile phone games. It’s immense popularity lead to a staggering 14 spin off games.

This game will almost certainly bring back the memories of frustration and anger.

Half Brick released Fruit Ninja on April 21st 2010 and by May 2012 it had reached over 300 million downloads across multiple platforms.

The objective of the game was to slice and cut the fruit that would fly up from the bottom of the screen consecutively without them dropping.

If one of them was to drop it would result in a loss of a life.

The arrival of arcade mode meant the release of the three banana power-ups:

Infinity Blade was a massive step up within iOS games.

Infinity blade is the first in the trilogy. Having been developed by Chair Entertainment and Epic games it was released by the App store in December of 2010 and was the first iOS game to run the Unreal Engine.

In the game you play an unnamed man who has a vendetta against the immortal god king.

To reach the god king you must defeat a series of champions who get more powerful as your journey within the God King’s castle ventures on.

As you carry on your journey you are able to buy equipment for your character such as;

Shields, again to increase the amount of time you can defend yourself.

For me, Infinity Blade was one of the few games that truly captivated and utilised the graphic performance of the older iPhone.

TouchGrind Bmx was the game that everyone wheelie wanted.

The game itself consisted of multiple levels that you’d have to navigate a BMX around performing tricks along the way.

The graphic and physics are amazing, engaging and fun.

Needing only two fingers to play the game Illusion Labs really made this app with everyone in mind.

It provided a fierce cycle of competition as you’d battle it out with your friends too see who could get the highest score on skyline (the best map).

Another good feature Illusion Lab included was unlocking better looking bikes with Adrenaline points that are obtained within levels.

This game served as a very good pass time for me when I was stuck in French lessons and I would definitely recommend to anyone wanting to pass the time.

(I am not responsible for any Phones confiscated at school)

Probably the cutest came on the list is Cut the rope.

The objective of the game is too feed a little green monster called omnom by cutting the rope which has suspended all the candy up in the air.

To pass each level you must simply manipulate the candy and make sure to feed omnom.

to get a high score on each level you must complete the level quickly and collect all three stars that are placed around the level.

Again, this game is another cool past time that I poured many hours into whilst waiting for the bus or other boring times.

If you didn’t have doodle jump downloaded onto your iPhone at some point then throw your phone away and start again because you missed out.

Doodle Jump is platforming game Lima Sky  in April 2009 and has sold over 15 millions copies since.

The aim is to get a little yellow creature called The Doodler as high as you can by bouncing on platforms that randomly generate.

You must aim the doodler by tilting your phone left and right to jump on the correct platform.

Throughout the game there are short boosts that players can acquire:

What goes up must come down, right?

And what’s a better way to stop the doodler going up than monsters and UFOs that you must shoot and destroy.

There are some things you just cant stop, like a black hole or being abducted by aliens

This game made me fall out with someone called Brad.

But its cool because we’re bro’s again.

Hot pursuit was the first car game I downloaded and I did not regret it.

It was first released on iOS in November 2010 by IronMonkey and published by gaming giant, EA.

Players progress through the campaign by collecting bounty and racing through Seacrest county.

With too many details to go into I will simply say there are two game modes jammed with events, races and other cool things which will keep you occupied for ages.

The best thing about this game is the local multiplayer you can access.

One player is the racer which is tasked to escape police and reach a designated location and the cop must do everything in their power to stop them. They are given powers such as:

This game gave me and my friends many hours of fun and would definitely fall out with Brad again.

Galaxy on Fire 2 was another great looking game that captivated its players from the start.

The follow up from Galaxy on Fire 1 see’s you as fighter pilot Keith Maxwell who ends up drifting through the galaxy due to a malfunction in his hyper-drive.

You soon find out that not only have you been blasted across the galaxy but you have in fact woken up 35 years in the future.

You then learn the essentials of GOF2 including:

Once the tutorial has been completed you will be given Gunent’s old ship, Betty.

Then you will be able to start the storyline properly and begin your epic journey against the dreaded void.

Real Racing 2 was the most immersive mobile racing games of its time.

When it was released in 2010, by Firemint, Real Racing 2 took the app store by storm.

When starting career mode the player finds himself buying their first car, VW Golf GTI Mk6 or a Volvo C3o.

Upon purchasing the car you will move to your first division, the Club Division.

The game itself is split into 5 divisions;

With each division comes individual races that progressively get more and more difficult.

Do you agree with these Ten EPIC Games For iPhone?

Overall each and every one of these games were truly the epicentre of my mobile gaming life!

Which one was your most favourite?

If you have played any of these games or you think we have missed any out be sure to share with us in the comments! 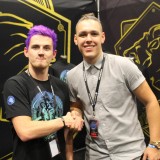 After meeting Daniel, the creator and founder of Double Up Gaming in school many years ago, he graciously offered me an opportunity to be a part of this ever expanding realm that is game journalism.
I find myself learning everyday with the help of our amazing team and discovered many hidden talents and hobbies.

1 reply on “Ten EPIC iPhone Games of Their Time.”

Calum, what a great article! Really inspired me to rejoice my youth :3 keep up the good work!!